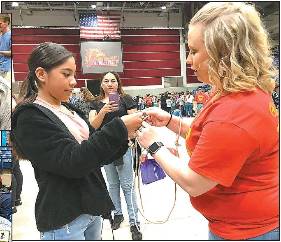 Hypatia, the first female mathematician whose life was reasonably well recorded, and Dr. Albert Einstein, who was celebrating his 140th birthday greeted more than 6,000 visitors and volunteers who attended Thursday’s celebration of Pi Day at the Lea County Event Center.

“I woke up at night worrying that no one would come,” she said as she looke over the attendance of the event. By 5:15 p.m., more than a hour after the doors opened, the number of visitors exceeded last year’s numbers and by 7 p.m. the turnstiles at the entrance to the Lea County Event Center had registered 6,000.

NMJC’s Pi Day had 127 different tables where 400 volunteers from the college and from local businesses were ready to demonstrate specific math principles or solve puzzles with passersby.

Andrew Richards, a volunteer from Conoco Philips, and Erik Jimenez and Amancio Cruz, both from Devon Energy, gave away packages of crackers to people who watched and listened to the information they gave about finding the volume of the package that held the crackers.

Tempting as the food may have been, both kids and adults were interested in the demonstrations at each table. Their interest may have been piqued by the desire to visit enough tables to be eligible for the drawings for door prizes like a Nintendo Switch, a computer, wireless earphones or a drone.

Mario Mendoza and Jesse Hansen, 8th-graders at Taylor Middle School in Lovington, carried pen and paper as they went from table to table.

“This has been more interesting than I thought it might be,” Hansen said.

Eusebio Cruz, 74, accompanied by his wife, Josie, was there as part of one of the classes he’s taking to earn his GED.

“I’ve got to get this for my job,” Eusebio Cruz said. “It’s been pretty interesting.”

Adjunct teacher Lucinda Laro took her College Success class to Pi Day for one hour of their three hour class.

“The students thought it was fabulous,” Laro said. “They didn’t have any idea that something like this was happening.”

“I am so glad I volunteered to help with this,” Fouts said. “I really like this environment.”

Susan Fine, NMJC director of Communications, said she saw several people “go around the turnstiles, so we don’t know how many people were here. I know we ran out of food before the day ended.”

People who served at the food tables were busy and at one point were awaiting delivery of more pizza. While people waited for pizza, they could munch on hot dogs, apple pie, popcorn, and chicken pot pie, as well as other goodies. The food stuff at the concession area was in addition to lots of candy bars, peanut butter and crackers and other food at demonstration tables throughout the building.

If Earth abides, Pi Day will roll around again next year on March 14 and plans are already underway for next year’s celebration.

Dorothy N. Fowler can be reached at education@ hobbsnews.com