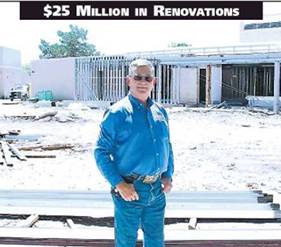 This year has seen a lot of changes in the way things are being done, and at New Mexico Junior College that means things are getting better for the future.

Currently renovations on the campus total about $25 million.

The Allied Health building was built as a result of the 2016 General Obligation, or “GO,” Bond. The building now houses most of the nursing and healthcare related students, and simulation labs associated with those programs. The building’s close proximity to Lea Regional Hospital makes it ideally situated for the programs.

The Allied Health building made it not only better in proximity for students to the hospital, but it allowed the college to expand the number of students and what they can do in the health field.

“That building was built with that being part of the funds in 2016,” NMJC President Kelvin Sharp told the News-Sun. “In 2018 we got the funding (to renovate McLean Hall).”McLean Hall formerly housed the nursing and healthcare programs, which moved in to the Allied Health  $25 building when it was completed. The move freed McLean Hall for the next step in campus renovations.

“It’s a domino effect. Nursing goes this way,” Sharp said gesturing the direction potential students new classes and labs will be. “And cosmetology goes to McLean Hall. Nursing has been (in the Allied Health building) for over a year.”

The $8 million renovation on McLean Hall should be finished sometime in late January and means the Cosmetology Applied Science program will move from Watson Hall, where it is currently located, to McLean in early 2021, perhaps by spring break.

“It will give those students a good educational experience and prepare them for the public,” Sharp said of the facility under construction that will have 60-65 cosmetology work stations in it.

Renovations on McLean Hall includes a new entrance for the cosmetology labs on the south side of the building where the public can also enter and get a full salon treatment as the students learn, Sharp said.

“They’ll be able to do pedicure, manicures, facials, fix their hair, the whole nine yards because that’s what those students are going to be practicing,” Sharp said.

With the move of cosmetology to McLean, Watson Hall — where cosmetology is currently — will be next in line for renovations. Watson will serve as an additional resource for healthcare students because of the proximity to the Allied Health building, Lea Regional Medical Cengter, and the proposed location of the new Covenant hospital facility across Lovington Highway.

“We think with Covenant coming to town, and supporting Nor-Lea and Lea Regional that we can probably prepare students for those allied health fields that they’re going to need, that we need some space, but we need to be close enough to the sim labs, so we can let them experience that,” Sharp said.

The funding for the renovations to Watson Hall, after the completion of McLean Hall, will be from the 2020 GO bond, which is on the ballot in November’s general election. The November ballot will be double sided, with the bond issue on the back side, so Sharp reminds all voters to be sure to look on the back of the ballot when voting.

Sharp also compared the Allied Health building to what completion of McLean will mean for cosmetology.

“We were able to expand our cohort and take a larger group of students. We put in the simulation lab, which alleviated some of our clinical problems. We can do some clinicals in the sim labs rather than have to go a hospital,” Sharp said of what the Allied Health building has done for NMJC. “The addition of the Allied Health building was terrific for the nursing program, and we’re anticipating the move to McLean Hall would do something similar for cosmetology.”

Sharp said those similarities mean a lot of positive changes for the students and the program.

“They’ll be able to expand their class size, We’ll put the high school class and the college class together, and they’ll be working on one area. That’s a great change,” Sharp said. “We want to create a more modern salon experience, what the students will experience when they go out to work.”

But those aren’t the only renovations going on campus. The Caster Activity Center, and the Caster Annex are in Phase I of a $17 million renovation on the 50-year-old building.

“Which meant the plumbing and the electrical were all that (50+ years) old,” Sharp said. “The gym itself stays the same, but everything around the gym is being renovated. It will bring this facility up to be the premiere athletic facility in our conference and in the region. ... When you walk in there it’s going to be an experience very similar to what you might get at New Mexico State or something like that.”

Sharp also said the galvanized water pipes being 50 plus years old in the gym, and given other parts of the campus, including in Sharps office, has had problems with leaking galvanized pipes, meant protecting the gym floor before a potential leak was a priority for the facility.

“Our greatest fear is with all the galvanized pipe that was in this facility, we’re going to get a leak under that wood floor,” Sharp said. “This has been all about the preservation of that facility and then bringing it up to date.”

Phases II and III will begin after graduation in May of 2021 for the activity center, Sharp said, with completion scheduled sometime in the fall of 2021.

NMJC currently has about 2,000 students enrolled, which is down about 10-15% due to COVID-19 and restrictions associated with it, but students have expressed they are eager to return to campus, Sharp said. While some of the enrollment numbers being down is because of changing dorms to all rooms being single student, instead of two students per room, or rodeo members who normally would have been enrolled from Texas, stayed in Texas, the biggest concern for Sharp is single parent students, or those with school-age children at home.

“The ones who have school aged children at home, and they can’t take the time to take a college class because they are working with those students with their online coursework,” Sharp said.

NMJC also implemented a four-day instructional week, which was put into place late last year to help those students out, “But, the COVID thing...” Sharp said slowly shaking his head and not completing the sentence.

Still Sharp said current renovations are exciting to see to completion, and he is looking forward to also finishing what began back in 2016. NMJC will be uniquely qualified to help those students who enroll with whatever their chosen fields are, based on the changes going on now, and those soon to come.