Into the Great White Sands 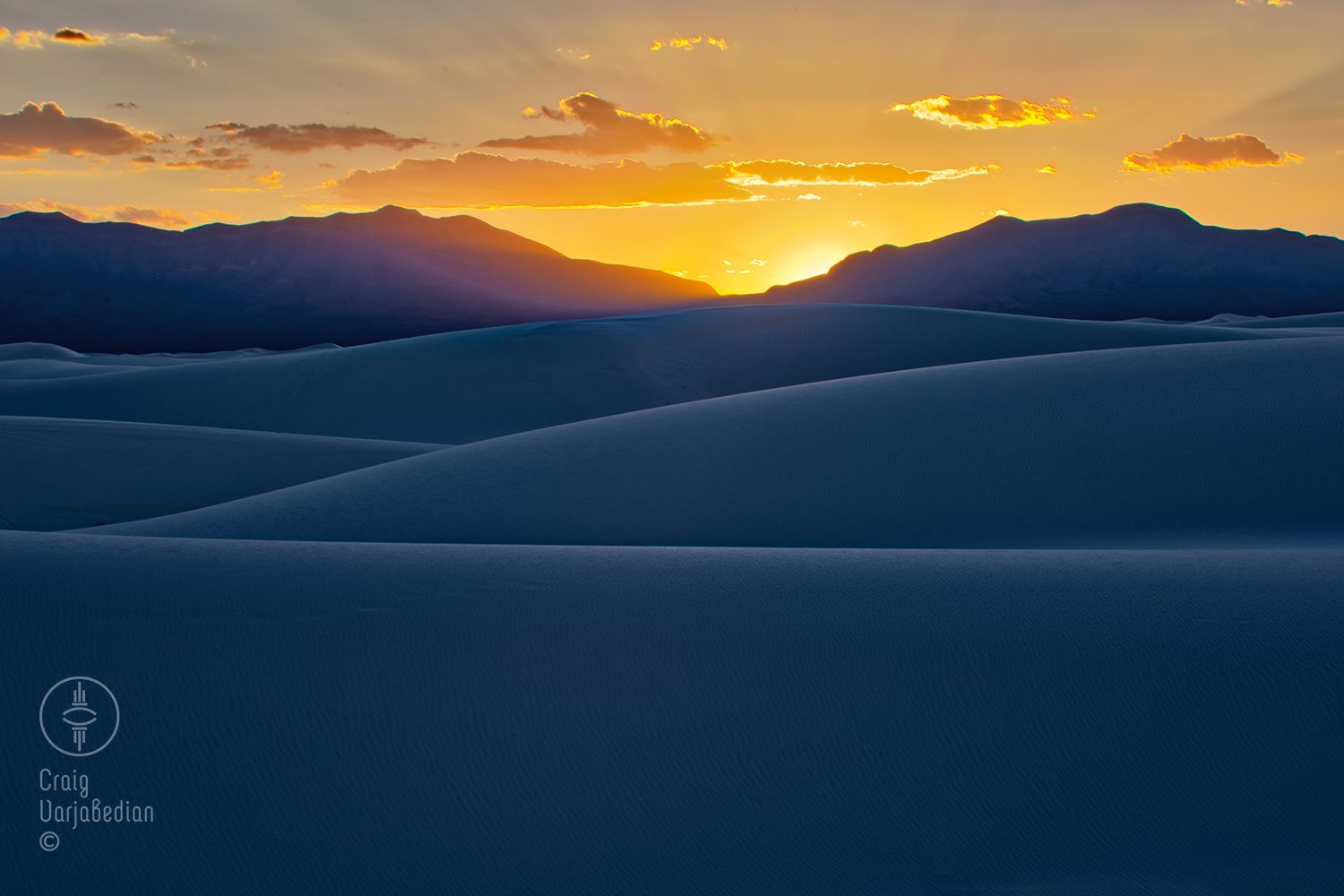 Into the Great White Sands: Photographs by Craig Varjabedian

Explore the newest National Park, White Sands National Park, with Into the Great White Sands: Photographs by Craig Varjabedian. Before White Sands became a National Park on December 20, 2019, artist Craig Varjabedian explored the surrealistic landscape of White Sands, near Alamogordo, NM, creating masterful images over a period of five years. White Sands is breathtakingly vast, encompassing 275 miles with a landscape entirely made of crystals of gypsum. Pure white dunes roll in waves for miles to the mountainous horizon- forming a landscape filled with spectacular color and astonishing light. The park is brimming with a history both ancient and recently relevant, contained in an environment with flourishing vegetation and wildlife - whose days begin in vivid sunrise and end in dramatically vibrant sunsets. The Sands is an unforgettably unique place - a land that words fail to adequately describe, but whose visual beauty and wondrous imagery Varjabedian has brilliantly captured in these eloquent and evocative pictures. The fifty images selected for this exhibition of Into the Great White Sands are from his collection found in his recently published book of the same name.

Craig Varjabedian’s photographs of the American West would be the perfect illustrations to a Cormac McCarthy book. They have a surreal beauty and poetic emptiness that border on the fictional. It’s as if this isn’t the real West, but the West of tall tales and American dreams. -Claire O'Neill, "The Picture Show," National Public Radio

Craig Varjabedian is an award-winning photographer, author, and teacher. His stunning photographs of the people and places of the American West are critically acclaimed, not only for their powerful imagery and artistic composition, but also for their ability to transcend the commonplace—immanently engaging the viewer with scenes that passionately reflect the artist’s connection to his subjects. Varjabedian achieves this goal through a skillful visionary acuity and intuition, allowing him to make photographs that expand awareness. As a result, viewers are presented with new ways of seeing and experiencing this region so integral to our collective imagination and our unique American identity.

Varjabedian’s gift lies in his ability to blend both technical expertise and illustrative narrative— depicting lyrical images that reveal the humanity and character of a vast sometimes barren country known for its legendary beauty and dramatic heritage. Varjabedian’s photographs tell contemporary stories that continue to inspire today what has historically been recognized as the "spirit of the Great American West."

Craig graduated from the University of Michigan with a Bachelor of Fine Arts degree, and received his Master’s degree from the prestigious Rochester Institute of Technology. As a fine art photographer for over forty years, Varjabedian has been widely praised for his masterful images ranging from awe-inspiring, expansive landscapes, to intimate soul-revealing portraits. He is also the director of Eloquent Light Photography Workshops in Santa Fe.

In further recognition of his work, Varjabedian has received grants from the National Endowment for the Arts, the Samuel H. Kress Foundation, the McCune Charitable Foundation, and the New Mexico Humanities Council. His photographs have been exhibited in, and his prints collected by, museums around the country, including the William Benton Museum of Art, the Baltimore Museum of Art, the Colorado Springs Fine Arts Center, the Harry Ransom Center at the University of Texas at Austin, and the Albuquerque Museum of Art.

In 1991, Craig received an Emmy Award for his collaboration with award-winning filmmaker Karl Kernberger on the PBS documentary En Divina Luz: The Penitente Moradas of New Mexico. Photographs from this project were published in a 1994 book by the same name. Craig’s other books include By the Grace of Light: Images of Faith from Catholic New Mexico (1998), Four & Twenty Photographs: Stories from Behind the Lens (2007); Ghost Ranch and the Faraway Nearby (2009), which received the prestigious Wrangler Award for Outstanding Photography Book from the National Cowboy and Western Heritage Museum; and Landscape Dreams, A New Mexico Portrait (2012), released to coincide with the New Mexico State Centennial.

Varjabedian’s latest book, Into the Great White Sands, a photographic celebration of White Sands National Monument, was published by the University of New Mexico Press in 2018. The book was awarded the New Mexico-Arizona Book Award.